I hate it when Mom tells me no. It hurts my feelings. She usually has a really good reason, like she knows it will hurt my leg or maybe make me throw up. Being told no for no reason at all is confusing.

A long time ago, before I was born, Mom wanted a little wall built. She asked three different men to do it for her because men are stronger than women. They can pick up rocks with ease. Their hands are bigger and stronger, too.

Mom waited a long time for her wall. Twenty-five years is over two of my lifetimes. That's long!

Well, it so happens that there are a couple of other projects Mom is expected to do this summer for other people. Yesterday, she put her foot down. She was done doing things for other people when she didn't have her wall. Until the wall was done, Mom was done. I don't think it went over too well.  It sure didn't for Mom. She was not happy.

With everything she does around here, a wall is a little thing to ask for. Like really. It's not even a big wall.

Mom got started on it and I didn't think she'd be able to do it. Rocks are heavy. She had to get the John Deere 1023 out because she couldn't lift the rocks much less carry them to the job site. And then there was the little garter snake she almost grabbed. I don't like snakes!

It took her two days, but she did it. But last night, when the wall was half-finished, Mom cried after we went to bed. She was really, really tired and her back really hurt. It didn't matter how she tried to rest, it hurt. I'm glad I was there for her.

Now that the wall is done, Mom told me something I just don't understand. She said sometimes it's true having is not as pleasing as wanting. I don't get that. When I want a Griller, getting IS better! Getting a Griller never makes me think that I wanted something so bad and no one would get it for me. That's what Mom says the wall is now. It's a reminder of how so many people didn't care enough to lend her their strength and how bad it made her hurt to physically do it.

I might only be a dog, but I get it. Being the pack means we don't let each other down, and Mom's pack left her down - and for a long time, too.

Tending the fire and a strange dog in my yard 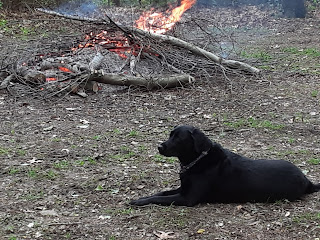 Yesterday was another fun day. A couple of weeks ago, at least I think it was weeks because you know dogs don't tell time very well, some big limbs fell out of some trees. The wind blew so hard they snapped off and came down. I don't like the wind. It makes weird sounds in the night and I bark. That gets me fussed for waking Mom.

Oh, yeah! Yesterday. Yesterday Mom and Dad finished burning the brush from when those branches came down. I like it when we can all be outside around a fire. A campfire makes me remember things I've never done. Mom says that's okay, that it's a sort of primal memory. I don't know what that is, I just know I like to watch the fire with Mom and Dad.

The fire burned for a long time. Dad said it was because the wood was still green. Really, Dad? It didn't look green to me. I know dogs don't see all the colors but I'd swear on my treat jar that wood was brown, tan, and gray.

We did have a couple minutes of excitement. A strange black dog with a red collar came into my yard. The hair stood up on my back and I went after him! He turned and ran away - fast! This is MY yard and I'll defend it! I'll keep an eye out for him, yes, I will, even though Mom says he probably won't ever come back and risk my ire.

First thing this morning, Mom and I walked out to check the burn pile. It's an ash pile now. But I know my parents. They'll keep gathering all the big sticks and limbs that fall out of the trees and make another brush pile. Then we'll have another day where we can relax and watch the fire. It's just the way things work in my yard.

I'm the most popular dog for a record 29th year! 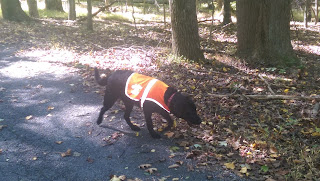 Well, not me exactly, but my breed! I'm a Labrador Retriever and the American Kennel Club (where I'm registered), says Labs have been the most popular breed since 1991. Mom says she's not surprised by that.

We can hunt, we're companions, and we serve. We're smart and adaptable. Heck, we like people! We're easy-going and supposedly energetic, but I don't mind being a couch potato. Being a shining example of my breed is a lot to live up to.

Mom says we Labs have a great ancestry that traces way back to Newfoundland. We share ancestry with the Newfies but somewhere along the line we got shorter hair and became the St. John's Dog. Then we were taken to England (that's the United Kingdom now) and became Labradors, and stayed Labradors. Black was our original color but now we come in yellow and chocolate. I'm glad I'm black. I'm Deuce! I'm an original!!

But there's one thing I'm really curious about. How come no Lab has ever won the best in show at the big show in Madison Square Garden? Huh? Can someone explain that to me? Mom doesn't know and that's sort of scary because Mom is smart.

I get it. The fix is in. The judges like little lap dogs. Well, I can sit on their laps if that's what it takes. I might squish them, but hey. Sounds like they need some squishing to get a good look at us Labs.  We're pretty special!

A what? What's a frittata? Huh? 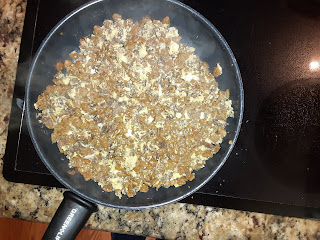 I wasn't surprised when she said she was making me a dogfood frittata. I have no idea why she called it that when it was an omelet. It was a cup and a half of my dry dogwood with two eggs scrambled over it. Maybe she wanted to see how I'd react to a new word. She didn't have to guess what I'd do when she put that concoction in my dish.

Now Mom's all happy she tricked me into loading up on some protein. I'm on to her tricks but seriously. EGGS!!

Part of the problem seems to be that Mom always read where Labrador Retrievers (that's me!) will eat anything at any time in any condition. But that's not me. I'm sort of picky about my food. See? Generalizations don't always work.

Seriously though, Mom. Next time you fix me a dogfood omelet, why don't you add a little cheese on top?