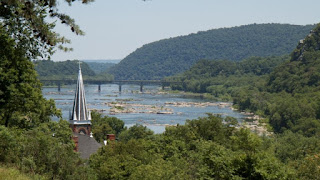 Mom had vacation days she said she had to use or lose so she took a long weekend. I like having her home for five days straight. I get to do a lot of interesting things when Mom is home with me and Dad. Today was great! Dad wanted to go for a drive and I got to go along! We took the new truck. 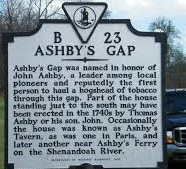 I was pretty excited to get to go along. We packed a cooler with lots of water and a bowl for me. We drove across the Potomac River, and then the Shenandoah River. I could tell from the way they talked Mom and Dad had been across those bridges quite a few times. They knew where they were going but it was all new to me.


We stopped at a Sheetz and had a smuffin for breakfast. Mom said folks will think I only ever get to eat people food but the truth is my parents are pretty careful about what sort of people food I get. Real protein, like eggs and bacon, Mom doesn't worry about. I know they're really, really good! After breakfast, Dad found a side road so I could get out and tinkle. Mom made me use my leash, which I didn't like. I wanted to explore but she said 'no' and she's the boss.

The road led up this big hill to a place called Ashby's Gap. Mom and Dad like it because as soon as you get to the top, the view of a valley, to the right, is pretty spectacular. Mom wanted to take a picture but it wasn't safe to pull over.

I got a little bored and made myself comfy. Sure the mountains were pretty, but see one and see them all. I tried to take a nap, but I couldn't. I was really glad when Dad made a right turn and I sensed we were headed home. We were gone almost four hours and even though we stopped every hour just in case I had to pee, it was a long time in dog minutes.

Going for a long ride with Mom and Dad is okay. I think it's better than being left home alone. Mom said we all learned a lot about how we can travel together. I think that means I'll get to go with them more often. I'm good with that. 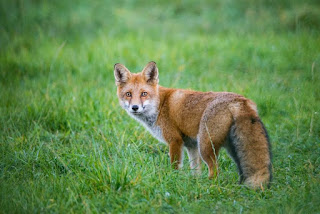 Saturday morning started out with a boom. Seriously. A big boom! The neighbor down over the hill fired a shot at daybreak! Dad said it sounded like a black powder muzzleloader. The deer hunters have a black powder season so lots of the neighbors have those guns.

Mom and I woke up to the big boom. Mom muttered something about idiots but since she wasn't talking about me or Dad, I went back to sleep for a bit. When we finally got up, Mom took me straight-away to the door like she always does. I knew as soon as I stepped outside something was wrong. I smelled it and pushed Mom back inside. She didn't know what was going on and fussed me for almost knocking her down.

I growled and growled so she started looking out the windows and that's when she saw it lying in the yard beside the patio - an injured red fox. Mom opened the bathroom window and the fox tried to get up and run but it couldn't. Its hind legs were paralyzed but it was still strong enough to drag itself a few feet and hide under the hostas.

Right away she told me it had been shot. Mom went into the bedroom and told Dad he had to get up and put the fox out of its misery. I had to think about that for a minute and I'm pretty sure she meant the fox was in a lot of pain and it made her sad. It made Dad sad, too. He got up and didn't even put on his pants before he loaded the rifle. He said we couldn't let the fox suffer any longer than necessary.

Mom and Dad used the backhoe on the John Deere to bury the fox. Even though they don't like having foxes around, they were still sad they had to put it down. They're kind of angry with the neighbors, too. They say if you load your gun to hunt, you'd better know how to make a clean, quick kill. They say it's wrong to let any animal suffer.

There were sticks everywhere! 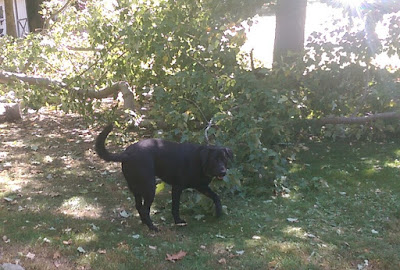 Yesterday, Mom, Dad, and a bunch of people cut down a tree. I got to meet cousin John. He's pretty cool. I like his red polka dot hat.

The tree that needed cut was a big oak. Like, really big. Mom rented a big lift and put Uncle Mike on it. Uncle Mike is fearless. He went up so high - all the way up as far as the lift would go. They didn't ask me if I wanted to ride along and I'm glad they didn't. I would have been scared. At least I didn't have to run away and let them all know that. It would have been embarrassing.

Most of the time I had to watch from in the house. Mom and Dad worried a log might fall on me and they may have been correct. Things falling from the sky isn't something I know to watch for. I got to go out and greet everyone, and then watch while they got the equipment positioned. Then I got to go back outside when Uncle Mike was finished cutting. Best of all, I got to eat lunch with everyone! Mom fixed me two plain hamburgers! I did do a lot of running yesterday. It's hard work keeping an eye on Dad when he's on the John Deere but I'm in really good shape and can run beside him.

I found a bunch of really good sticks while everyone worked. Mom and Aunt Donna played fetch with me. The guys - not so much. They were focused on getting the job done, but Mom knows it's important to make me feel like one of the pack.

Today me, Mom, and Dad are going to burn a brush pile. There's a lot to burn, too. I'd say it's a waste of perfectly big sticks but I know I can find more.

I just hope Mom fixes something good for breakfast. I burned a lot of calories yesterday! 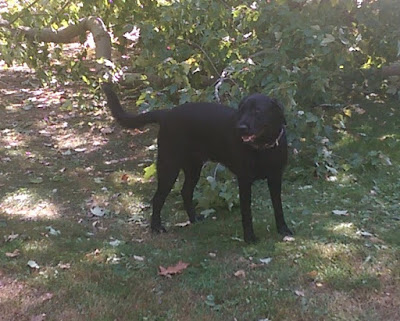 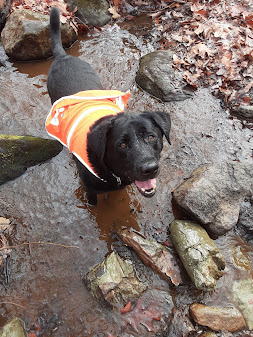